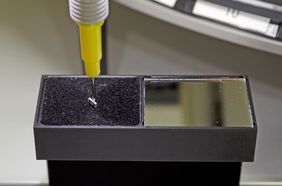 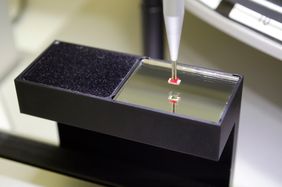 Anybody who works with loose components by prototyping knows the problem. Not for nothing the term „bird food“ is in use: Particles are lying total accidentally in confusion, partly on the bottom. Or the components are in the right position but the user has to flip them because the sign of polarity is on the bottom side – important especially for LEDs.

The FRITSCH company from Utzenhofen/Oberpfalz developed a cost-effective solution to sort the crowd „bird food“ fast and easy. With a flexible combination of polarity check and manual component flipping FRITSCH spares the user time-consuming and exhausting operation - with tools like tweezers or vacuum to flip the components or to read at the bottom the sign of polarity.

The station is a mirror and an ESD-fleece. The operator picks a component with the nozzle at the manipulator head from the feeder. He brings LEDs to the polarity check over the mirror. With his eyes or the optional camera system he can read the polarity without set it down. Turned components put the user on the ESD-fleece of the station and flip it with the top of the nozzle in horizontal motion.

As well as the test the flipping or a combination from both last only a few seconds.

The Combi-Station for the component flipping and polarity check is compatible to all FRISCH Light-Manipulators LM900, LM901, SM902, SM902professional and MP904.