35 years of innovation and quality made in Germany! 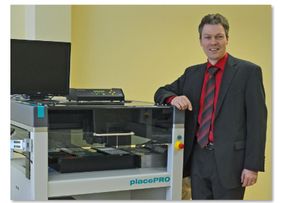 “New developments and products show up to us positively in the future”, says CEO Markus Fritsch confidently.

In 1978, Dipl. Ing. Adalbert Fritsch founded a small company and thus laid the foundations for today’s Fritsch GmbH. The first years focused on the manufacturing of special machinery. Various pick & place and assembly systems were developed and built, including a machine for the assembly of watch parts. When, at the beginning of the 80s, SMD circuits became more and more accepted in the manufacturing of electronics, the inventor Adalbert Fritsch rapidly recognised how the future would be: He developed the manual manipulator which was introduced to the market in 1985 as the LM85. The product range increased first by a semi-automatic manipulator, a fine pitch manipulator and a handling system for rework. Further product developments provided a constant sales increase.

In 1993, Markus Fritsch took over as manager. Further international sales channels were opened up and the course was set for entering into fully automatic pick & place machines. Fritsch was thus one of the first companies to introduce a small pick & place machine to the German market and was rewarded with brisk demand. A first extension to the company building became necessary and the production areas were constantly expanded and modernised due to the continuous growth.

Fritsch GmbH proudly looks back on 35 years during which they have turned into one of the leading manufacturers of SMT equipment.

With the placeALL®700 Fritsch GmbH presented their latest fully automatic machine at the SMT Trade Fair in Nuremberg. Equipped with the newest technology in the field of drives and with up to four assembly heads and a vision system, the machine is optimised for flexible and precise SMD production.

Fritsch says thank you to all their customers, business partners and employees as the long-standing success of Fritsch GmbH is down to them.