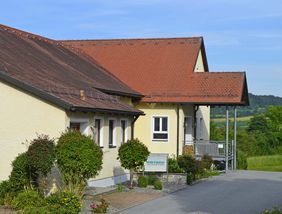 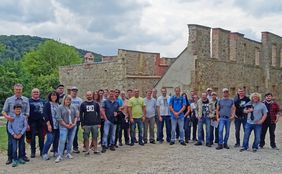 This is one of the typical German success stories: Somewhere in the outback, a talented tinkerer goes self-employed. With a lot of technological know-how and the knowledge of his sales market, he steadily develops his company and conquers a niche where he serves customers all over the world with custom-made high-tech machinery. One example of this is FRITSCH GmbH from the Upper Palatinate market town Kastl, situated between Nuremberg and Regensburg. In 2018, they are celebrating their 40th anniversary. Their equipment mainly serves the production of electronic circuits and components. “We supply manufacturers of smaller lot sizes”, Markus Fritsch, the managing director, explains “ from the manual production of prototypes to the fully automated production of medium-sized series”.

The company history was started by Markus’ father, Adalbert Fritsch, in 1978. He founded a small company that solely focused on the construction of special-purpose machinery in its first years. Fritsch Senior developed various mounting and assembly systems, which he marketed successfully. In the 1980s, the entrepreneur recognised that SMD circuit boards would be the future of electronics manufacturing. He introduced his first manual manipulator, the LM85, for handling SMD components, to the market, which he presented at the Hanover Exhibition.

Between 1980 and 1990, the number of different electronic assembly parts in SMT production grew fast. Increasing lot sizes furthered automation. The young Kastl company followed market demands. They continuously increased their range of products and services. A semi-automatic manipulator, a manipulator for fine-pitch components as well as various handling systems for repair work followed the manual manipulator.

The manipulators for high-quality prototypes, pilot and small series form the core of the range of products to this day. “Our latest model, the MP904, is distinguished by simple handling with the highest degree of precision at the same time”, says Markus Fritsch.

Markus Fritsch took over responsibility in the company from his father in 1993. This means he is also celebrating his silver anniversary as managing director in 2018. On the basis of his experiences, the products and customer relations, which grew under his father’s responsibility, he has expanded FRITSCH GmbH to become one of the world’s leading companies in its sector. They supply SMT equipment with which their customers manufacture smaller lots of prototypes down to medium-sized series. “Our machinery is used for product development, manufacturing pilot series or for when the lot sizes are not or not yet sufficient for the setup of a classical production line”, says Markus Fritsch

In order to be able to cover all of these requirements, Fritsch Junior developed the range of products a decisive step further. Under his management, the first fully automated pick-and-place systems of the placeALL® series were developed, which his company offers in five basic variations today.

Parallel to the advancing process of miniaturisation, the Kastl company has continued to further develop their machinery. Equipped with modern and very intuitive operating software, all-round equipment has been developed for any possible SMT scenario.

The latest procreation of the pick-and-place machines is the placeALL®515 since 2017. It processes all different kinds of parts such as chips, FP components and BGAs. “With up to 200 different feed positions and intelligent software, the machine significantly reduces changeover times”, Fritsch explains – an enormous production advantage especially with small lot sizes.

In the 40 years of their company history, FRITSCH GmbH, idyllically situated between hills, woods and fields in the Kastl district of Utzenhofen, has constantly grown. Conversions and extensions created the necessary space. Today, FRITSCH GmbH employs 35 People.

“Construction and production have always gone hand in hand here. Moreover, to this day, we have been developing the electronics, the mechanics and the software of our machines ourselves”, Markus Fritsch, who holds a degree in electrical engineering, emphasises.

This differentiates his company from many competitors. FRITSCH GmbH is able to implement customised components, custom-made modifications to the machines or complete special designs relatively fast and at competitive prices. FRITSCH offer their products on all key markets worldwide via sales representatives in all European countries and on all continents.

“Although automation is increasing further, of course, the market for manipulators has remained an important foothold of our company”, according to Fritsch. This is why product development in this sector is not resting.

The MP904 pick-and-place system has been complementing the manipulator series of the Upper Palatinate company since 2013. It has two assembly heads and a vision system. The MP904 thus covers the entire range of SMD components to be assembled. “During the development, we paid attention to the easiest handling with the highest precision at the same time”, the managing director explains. FRITSCH offers the machine as both a purely manual system and as a semi-automated machine.

The MP904 combines the effortlessness and flexibility of the other members of the manipulator series with the required precision when assembling fine-pitch components such as BGAs or QFNs. “The unrivalled smooth-running guide of the assembly head enables small and simple SMDs to be placed precisely”, Fritsch emphasises. A cartridge adapter can be attached directly to the assembly head for the application of soldering paste or adhesive. The stable handling head for fine-pitch and GBAs has a vision system. The system guarantees the precision-placing of the components in a simple way.

Typical customers for the manipulators by FRITSCH are universities, research institutes, research departments or newcomers to SMT production.

An allrounder for dosing

Equally in 2013, FRITSCH GmbH introduced a new machine to the market for dosing various media in electronics and mechanics manufacturing. “The dispenseALL420, as a consistent further development of the existing series, is a real allrounder”, according to FRITSCH. Whether soldering paste, adhesive, sealing compound or lubricant, the machine processes various kinds of media from liquid to highly pasty. There are various dosing valves available from the simple time-pressure valve, over a precisions dosing valve and a screwed valve to a jet dispensing system and a spray valve, depending on the media and requirement.

The dosing portal of the dispenseALL420 can take up to four different dosing heads at the same time. Being flexible in all directions, they are suitable for many different components and applications.

The control software is oriented towards the requirements in real life. “In close collaboration with our customers, we have set up the software of all of our machines in such a way that it can be operated intuitively” Markus Fritsch emphasises.

Screen printing with the highest degree of precisions

In 2013, FRITSCH also introduced the semi-automatic screen printer printALL210 in XL format. FRITSCH customers value the fact that it can process PCBs of up to 1,2000 millimetres in length as are frequently used in the assembly of LEDs. The flexible holding fixture reduces the set-up time to a minimum. The vision support enables the recognition of the finest of structures and the precise alignment of the PCB. The printALL210 XL can be controlled intuitively via its touch display.