FRITSCH developped the XL Version of the stencil printer SD903 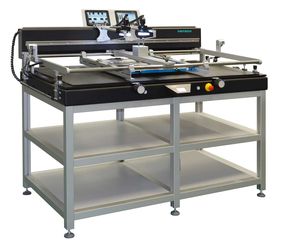 The placeALL®610XL by FRITSCH with the largest assembly space of the 610 series is becoming increasingly popular.

The trend towards large surface space assembly of SMD LEDs in particular is causing growing demand for machines to assembly particularly large PCB. The placeALL®610XL with its assembly space of 1020 x 770 mm optimally meets these requirements. The large assembly area not only facilitates the processing of large PCBs but also provides sufficient space to accommodate several tray carriers for the likes of BGA parts.

Besides the large assembly area, the placeALL®610XL provides a large number of feeder positions. It is possible to equip the machine with up to 346 different automatic feeder positions in addition to the trays.

The placeALL®610XL with its extremely large depth also allows, however, the integration of an in-line system in the front part of the machine. Here, up to 262 different automatic feeder positions and room for several trays can also be used.